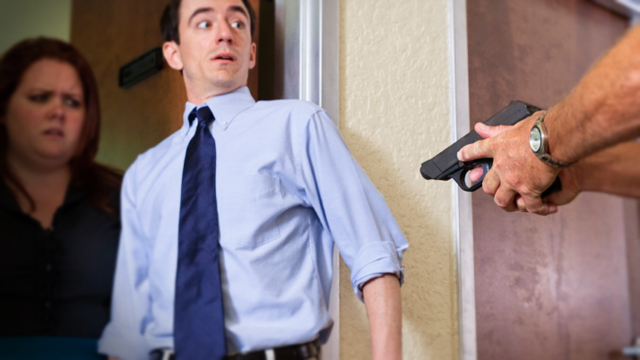 Narrator: It may feel like just another day at the office.

A series of shots shows a standard office. People work at cubicles. One desk has an American flag.

But occasionally, life feels more like an action movie than reality.

A muscular man dressed in all black, wearing sunglasses and carrying a backpack, walks towards the office building. Inside the building, the employees are still going about their daily tasks. A security guard talks with a woman. A visitor greets a staff member.

Narrator: The authorities are working hard to protect you and to protect our public spaces.

Two employees say hello to each other and get into the elevator.

We cut back to the sidewalk outside, as we continue to see the man in black approaching the building. As he walks, a series of facts are displayed on the screen.

Narrator: Their motivations are different.

The man in black starts up the steps to the glass front doors of the building.

Narrator: The warning signs may vary, but the devastating effects are the same.

The man in black opens the front door of the building. As he enters, we see a notice on the glass prohibiting the carrying of concealed handguns in the building under penalty of trespass.

Narrator: … and unfortunately, you need to be prepared for the worst.

The camera pans past a series of people at their desks and stops in front of the elevator, where the security guard is talking with an employee. The man in black walks past the guard, removes a shotgun from his backpack, turns around, and shoots the security guard and two employees. More shots are fired. A woman at a photocopier hears the noise and looks around.

Narrator: If you are to ever find yourself in the middle of an active shooter event, your survival may depend on whether or not you have a plan.

The man in black stops shooting in the lobby and starts walking off.

Narrator: The plan doesn’t have to be complicated.

A man in a purple shirt looks up, startled. A woman hangs up a phone and looks down the hallway at the commotion.

Narrator: The plan doesn’t have to be complicated. There are three things you could do that make a difference: Run. Hide. Fight.

The woman who was on the phone stands up, moves into the hallway, and looks scared. Another woman, wearing pink, sits at her desk with an alarmed look on her face. She then gets out of her chair and moves under her desk.

Narrator: First and foremost, if you can get out, do.

The man in purple starts running down the hallway. He grabs the woman who was on the phone and continues moving towards the exit.

Narrator: Always try and escape or evacuate, even when others insist on staying.

The man in purple and the woman who was on the phone pass the cubicle of the woman in pink. They help her up and the three continue moving towards the exit.

Narrator: Encourage others to leave with you, but don’t let them slow you down with indecision.

The man in purple stops, looks around a corner, then continues to lead the two women out. The woman in pink looks very afraid, but the other woman encourages her to keep going. The three employees enter the stairwell and start moving up the stairs.

Narrator: Remember what’s important: you, not your stuff. Leave your belongings behind, and try to find a way to get out safely.

The three employees leave the building through an emergency exit. The camera turns to a mechanical area behind the building, where another man is locking a bicycle to a bike rack.

Narrator: Trying to get yourself out of harm’s way needs to be your number one priority.

The three employees come around a bend and take shelter behind a cinderblock wall protecting mechanical equipment. They are now out of sight of the front of the building and the emergency exit.

The man with the bicycle has headphones off, and walks off, looking at his phone. The man in purple runs out and gets the bicyclist’s attention. One of the women screams “hey” at the cyclist.

Narrator: Once you are out of the line of fire, try to prevent others from walking into the danger zone and call 911.

The man in purple leads the cyclist back to the area where the employees are sheltering. The woman who had been on the telephone calls the police from her cell phone. The woman in pink is still panicking, but remains with the group.

Caption: RUN. When an active shooter is in your vicinity:

· If there is an escape path, attempt to evacuate.

· Evacuate whether others agree to or not.

· Leave your belongings behind.

· Help others escape if possible.

· Prevent others from entering the area.

The camera cuts back to the office, where we see the woman who was at the photocopier. She looks out the door, but quickly ducks back into the room.

Narrator: If you can’t get out safely, you need to find a place to hide.

The woman from the copier closes the copy room door and looks around the room. The camera cuts to a group sitting in the break room. More shots ring out. The employees in the break room stop talking and begin to look around. They all rise from the table at the same time. A man in a brown suit motions for the group to stay still for a minute, and a woman in red says “oh my gosh.” The man in the suit looks out into the hallway and sees other people running at the far end of the hallway. He moves back into the break room and closes the door. Another man, in a blue shirt, signals the others to stay quiet as he and a man in yellow move the table to barricade the door.

Narrator: Act quickly and quietly. Try to secure your hiding place the best you can.

The camera cuts back to the copy room, where the woman at the photocopier moves the machine in front of the door. She then shuts off the lights and pulls out a cell phone.

Narrator: Turn out lights, and if possible, remember to lock doors. Silence your ringer and vibration mode on your cell phone.

The woman in the copy room slides the ringer volume control on her phone to silent, then turns the vibrate mode off. The camera cuts to the shooter, who is walking through a set of cubicles. The employees are all in hiding or have left the building. He reaches for a doorknob, but finds it

locked and moves on.

Narrator: And if you can’t find a safe room or closet, try to conceal yourself behind large objects that may protect you.

The camera shows the woman in the copy room crouched in the corner between the wall and the copier, her eyes closed, silent.

Narrator: Do your best to remain quiet and calm.

Caption: HIDE. If an evacuation is not possible, find a place to hide.

· Lock and/or blockade the door.

Caption: Your hiding place should:

· Be out of the shooter’s view.

· Provide protection of shots are fired in your direction.

· Not trap or restrict your options for movement.

The music switches from suspenseful to a faster tempo. The camera switches to the break room, where the group of employees realize that they are in trouble.

Narrator: As a last resort, if your life is at risk, whether you’re alone or working together as a group, fight! Act with aggression. Improvise weapons. Disarm him.

The employees in the break room try to calm the woman who is panicking, and begin organizing themselves. The man in yellow picks up a chair. He looks apprehensive, but moves towards the door. The panicking woman moves into a corner. The man in brown stands to the side of the door, holding a fire extinguisher above his head, ready to swing. He silently mouths to the others, asking if they’re ready.

Narrator: … and commit to taking the shooter down, no matter what.

The shooter enters the break room holding an assault rifle, and the employees attack. Two employees are holding coffee mugs, while the other two start to swing with the fire extinguisher and chair.

Caption: FIGHT. As a last resort, and only if your life is in danger:

· Attempt to incapacitate the shooter.

· Commit to your actions.

The tempo of the background music slows, as the camera cuts back to the exterior of a building. Three more employees exit, and the group in the mechanical area gets their attention, directing them to the hiding place.

Narrator: Try to be aware of your environment. Always have an exit plan.

The camera cuts back to the interior of the building. The police have arrived. Some are patrol officers, wearing blue uniforms. Others are part of the SWAT team, wearing camouflage fatigues and helmets. All the officers are holding assault rifles. They are entering in a tactical formation, with some officers looking forward while others check to the sides and behind them. They stay as a tight group.

Narrator: Know that in an incident like this, victims are generally chosen randomly. The event is unpredictable and may evolve quickly.

The officers begin entering offices one by one, searching for the shooter. They pass a man lying on the ground, continuing to search for the man in black.

Narrator: The first responders on the scene are not there to evacuate or tend to the injured. They are well-trained, and are there to stop the shooter.

The music changes to a more upbeat, militaristic march. The police continue to do a room-by-room search as they pass by more casualties. Officers check each stall in a bathroom before moving down another hallway.

· Keep your hands visible at all times.

· Know that help for the injured is on its way.

The front door of the building slams open and more employees pour out. They are running with their hands in the air, palms facing forward to demonstrate that they are not holding any weapons. A man assists others as they round a bend on an exterior stairwell. We then see a shot of a fire engine parked in front of the building.

Narrator: Your actions can make a difference for your safety and survival. Be aware and be prepared.

More people leave the front door as a firefighter directs them towards a rallying point. More people are running down the exterior stairwell. As he rounds a landing, a man removes his suit jacket, but does not slow down. Other employees, including the group from the break room, are crouched on the ground by the fire engine, out of breath, but uninjured.

Narrator: And if you find yourself faced with an active shooter, there are three key things you need to remember to survive: Run. Hide. Fight.

The camera pans across the employees congregated by the fire engine. Many are talking with one another. Others are on cell phones. A firefighter moves past, giving directions as the screen fades to black.

We’re here to help, so feel free to contact us.